We had been advised by the hotel staff to go and visit the Midnight Sun Dome. This was a hill behind Dawson where in 1901 hundreds of people went up the hill, on the solstice, to see the midnight sun. However as they were too far south by about 4 degrees, the sun set at 11:30pm. The hill still got its name despite the lack of sun. The views from here were however, magnificent.


We drove back down the hill and intending to buy a bigger tent we drove along the river front an we found, parked outside a cafe, three more Super Tenere's, just like Wallace. I insisted we stopped for some breakfast and coffee. We got talking to the riders and later discovered that two of them were pilots. 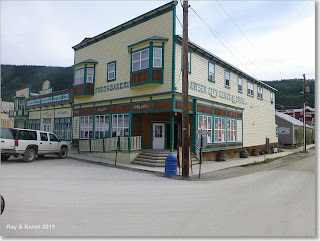 After brekkie, we went into a nearby shop and bought a larger tent. It weighed a fair bit more than the old one but we could at least stand up in it and hide from the mosquitoes. We asked the girl who sold it to us if we could dispose of the old (albeit hardly used) tent and she asked if she could have it for herself. Naturally the answer was yes as we could not carry two and aside from fruitlessly looking for a buyer, it was going in the bin. She was a happy little girl.
We the set off, armed with out new tent, for the ferry to take us across the Yukon (again). It is a small government owned free one. 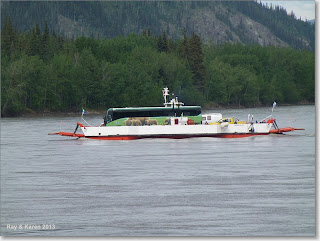 As we rode off the ramp of the ferry onto the dirt we were now on ‘The top of the World Highway’. It was magnificent. We then had just over 100 miles of dirt road ahead of us before we hit the customs post of Alaskan, America. This time we here on the top of the hills instead of being in the valleys below and beside rivers. The views were brilliant.

We entered Alaska through the remote border post and on chatting to the Immigration/customs officer, he too was looking forward to retirement next year. He actually lived in the Government house adjacent to the post. He is the only person for miles around. To compensate, he gets a good wage and $100 a day subsistence.

We also lost another hour at this border and are now 9 hours behind the UK.
We then came upon a road junction and the sign just made us laugh....  choices  choices

We opted for Chicken, actually Eagle was a dead end so we knew where we were going really. So on to Chicken. This is a mad little village that was one of the boom and bust places of the gold rush era and the story goes that it got its name from the Ptarmigan bird that frequents the area (like the one in Scotland) but they could not agree how to spell it so came up with Chicken instead.


This local guy was taking no chances...

After leaving Chicken the road changed back to tarmac. More fun for Karen, less fun for me.
We see for hundreds of miles, and probably millions of acres, that the trees were dying. We had been told previously that this was due to the ‘Pine Beetle’. Sadly the effect was devastating and the only way to cure it was to burn the whole forest, a daunting prospect the on occasion, mother nature has a hand in (lightning strikes).


Karen spotted this beast that crossed the road in front of us. Moose are huge and this photo does not do justice to the scale of it. it was about 7 foot to the shoulder.

Another Hundred miles and we arrived in the next village of Tok. Tok is an odd place and everyone that does not fly into Alaska has no option but to drive to drive through it. Hence it is a sort of hub where you can get virtually anything you want in only a few sprawling shops. The good thing is that the camp site is a good one with wood shavings placed on the tent sites to make them more comfortable. The other good thing is that we met up with the other boys on the Wallace look alike bikes and we had a great night talking rubbish and giving a few beers. Sadly it did not get dark so we mentally thought it was about 8pm from 8pm to 1am and sort of, forgot to go to bed.

We were now back on the Alaska Highway and it is a 200 mile hop to Fairbanks, the weather was starting to get unusually hot for this area, 28 deg C. This was Alaska, it is supposed to be cold. The heat inside our jackets was searing and we had to keep moving to cool down. We crossed the river Tanana and decided to stop for some lunch and a few piccys. It was beautiful.


It was then back on the road and the village before Fairbanks was called ‘North Pole’. Guess what that meant. Father Christmas, what else.

We rolled into Fairbanks and went in search of the only campsite in town. It was crap with the only facilities being a table, a toilet and a tap. Karen was not amused.
We went out for some provisions and a bite to eat and then retired to an early night,  going to bed at the real 8pm.
Posted by Ray and Karen Hall at 5:11 pm